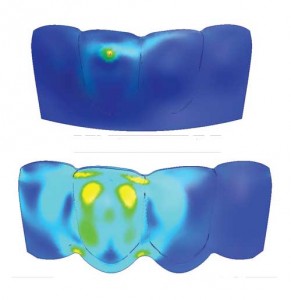 Removable orthodontic aligners, created using computer-aided technology, were introduced in the 1990s. The aligners are made of clear plastic and formed on models that were digitally modified to slowly correct the alignment of the teeth. This mechanism of alignment is referred to as broad surface pressure. A sequential series of aligners is used to achieve the end result. The number of aligners will depend on the complexity of the case.

The original concept behind orthodontic aligners was an outgrowth of Dentsply Raintree Essix plastic used to stabilize anterior teeth (canine to canine). Essix® was, in fact, an acronym created by Jack Sheridan more than 3 decades ago to describe his esthetic solution for correcting the six anterior teeth (aka, the social six). Align Technology Inc took this modality into the lab, giving doctors the option to outsource.

Invisalign is a full-mouth orthodontic appliance system. It created tooth movement through a series of sequential digital setups. The system was simple at first and has gone through many iterations over the years to make it more effective for many types of tooth movement. This system requires special training to utilize it, and is rather costly to purchase. The high cost of the training and the appliance itself is a barrier for many doctors as they do not experience enough frequency to justify the cost for its use. 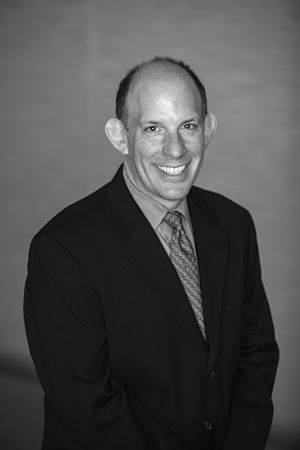 Neil M. Warshawsky, DDS, MS, founded Get It Straight Orthodontics. A board-certified orthodontic specialist since 1992, he has more than 15 years of experience with cleft palate and craniofacial cases, and lends his support to craniofacial teams in the greater Chicago area. He has been lecturing on minor tooth movement since 2005 and has traveled all over the world teaching aligner design and functionality. Warshawsky received his DDS, Masters, and Certificate of Orthodontics from the University of Illinois at Chicago, and is a member of the World Federation of Orthodontics.

However, alternatives have entered the market. Dentsply Raintree Essix recently added a new prebuilt aligner option. Known as MTM® Clear Aligner Service Center, it combines the use of clear aligners (also based on Dentsply Raintree Essix plastic) with a unique “open pathway” architecture and integrated “force points.” Minor tooth movements of the anterior teeth from canine to canine or, if a “substitution tooth” is present, the anterior six teeth that would be from the canine position forward, can be generated to resolve minor crowding, rotations, space closure, tipping, and torque issues.

The Ins and Outs

Advantages of MTM Clear Aligner Service Center include esthetic orthodontics, targeted interventions, space created using the proven, minimally invasive IPR technique, and a lower cost than more aggressive full-mouth aligners or fixed orthodontic appliance therapies. In addition, the use of narrow contact surface pressure points (Figure 1A) enables refined tooth movement without the risk of distortion during placement of the aligner(s) which may occur with broader contact surfaces (Figure 1B) and may result in unintended, or a lack of intended, tooth movement.

Successful tooth movement is achieved by following a direct and straightforward staging approach. Integrated force points are utilized that have exact depth, height, and mesial distal placement to enact the desired tooth movement. As a result, the need for attachments is eliminated. These force points can be used to induce tooth rotation, tipping, torquing, and bodily movement. As with all orthodontic cases, careful case selection and planning are required (Table 1). 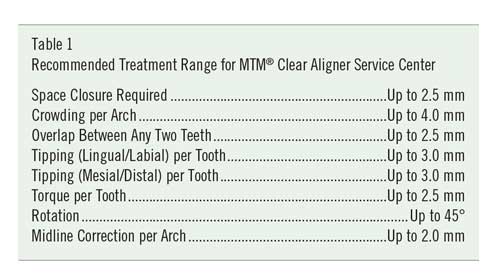 At the treatment planning phase, diagnostic radiographs and images, as well as polyvinylsiloxane impressions and bite registration or intraoral scans, are submitted to MTM Clear Aligner Service Center. All patient information and a full dental history, including any previous IPR and other orthodontic therapy, is submitted online and archived on the site at mtmclearaligner.com. Each clinician has a unique page on the site, password-protected and accessible only for that clinician.

During the submission process, the desired tooth movements and IPR can be noted on the chart available on the web page, or the clinician may elect to have the lab propose a prescription that addresses indicated treatment objectives. Tooth movement is limited to 0.3 mm per aligner; thus, the number of aligners required depends on the complexity of the case (Figure 2). Note: the service is priced as a flat fee with no limit to the number of aligners, and one free refinement if needed, resulting in a predictable cost to doctor and patient.

The clinician reviews the working setup on a 3D digital model. All working aligners will be built off a single “merged hybridized model.” It is created by combining the digital pre-treatment model on top of the proposed final tooth position (Figure 3).

The proposed treatment plan is delivered to the doctor through the online portal for evaluation and critique in a 3D PDF format. Note no special computer equipment is required to review this file. Once the treatment plan has been created, the clinician reviews this and approves it, or he/she can ask for adjustments to the plan. Aligner production begins only after the proposed treatment is approved by the clinician.

Unlike some of the other leading aligner systems, all required aligners are fabricated at the onset of treatment, numbered, individually packaged, and sent to the clinician who then follows the prescribed treatment plan and changes out the aligners every 3 weeks until completion. Each case will come with a summary table indicating the purpose and location of the force points by stage, as well as the detailed sheet per stage which indicates any and all IPR, in addition to the force point magnitude and direction.

Unique to this system, the working aligners are always the same. As such, MTM Clear Aligner Service Center aligners always “Fits First.” I find that most other leading aligner systems are designed technically to not fit, so it is understandable that their systems will have an expected amount of cases requiring refinement. This number will be much higher than MTM Clear Aligner Service Center due to the fact that these aligners have open architecture built into them.

Figures 4A and 4B: The goal was to realign the anterior teeth and close the diastema. Figure 4C: The heat map shows progress of the correction.

Case 1 (Figure 4A and 4B) displays a diastema between the central incisors that was the result of a malposed incisor. The objectives of this case were to realign the anterior teeth and close the diastema simultaneously.

A heat map of the following image (Figure 4C) shows the accuracy of MTM Clear Aligner Service Center in mid flight as the correction (green color) is nicely under way after the completion of the third aligner out of eight stages. At completion of treatment with MTM Clear Aligner Service Center, the diastema was reducing and alignment was improved.

Figure 5: This case shows correction of a mild rotation due to orthodontic relapse from a previous corrected position.

Case 2: Tip and Rotation Control of the Anterior Teeth

Case 2 is a good example of one of the strongest attributes of MTM Clear Aligner Service Center—correction of a mild rotation due to orthodontic relapse from a previous corrected position.

Figure 5A depicts a typical relapse that can routinely be seen when a patient discontinues retention too early following comprehensive orthodontic care. After completing eight of nine stages of the MTM Clear Aligner Service Center, we can see notable progress in Figure 5B.

Meanwhile, a heat map (Figure 5C) clearly demonstrates rotational control on the right central incisor in addition to tipping of the left central incisor to create better arch correlation in the maxillary arch. (Note that this patient only wore the aligners approximately 16 hours per day and not the intended 20 to 22 hours as our office recommends for efficient correction.)

Figure 6: MT Maligners were used for 4 consecutive months to change not only the root position but also the crown position, as shown in Figure 6C.

Case 3 (Figures 6A to 6C) demonstrates a significantly more difficult problem to address when a tooth bodily moves out of alignment. Force points are an effective solution for problems such as these because the point at which the force application is applied will determine the type of tooth movement to occur. Typically, the lower the force application is to the center of rotation, the more likely you lessen the tipping effect and increase the bodily movement (referred to as torque).

Figure 7A: Patient presents with crowding. Figure 7B: The case was treated over 4 months by tipping to align the teeth and some minor interproximal contouring.

Figure 7A depicts crowding naturally occurring in a 24-year-old Caucasian female ?who has never had any orthodontic treatment. A simple treatment plan was designed for this case ?that utilized tipping to align the teeth along with some minor interproximal contouring. The patient was looking for a minimal solution to improve the appearance of her teeth without incurring significant cost. Figure 7B ?shows that an effective solution was achieved in less than 4 months.

Figure 8A to 8D: Case depicts a more significant failure in the alignment of the lower incisors. The figures show treatment at 0, 4, 5, and 6 months of treatment.

In Figures 8A to 8D, we can see a case that depicts a more significant failure in the alignment of the lower incisors. Figures 8A through 8D represent months 0, 4, 5, and 6 of treatment using MTM Clear Aligner Service Center. Overall, I have found the product to be an efficient, cost-effective solution to realign the teeth. Combined with prudent IPR, I believe it will predictably resolve up to 4 mm of dental crowding and restore the alignment to an affected area..

In Figures 9A through 9C, we see a more complex case, requiring significant IPR and a series of 14 aligners. The 3D image shows the merged hybridized model with the ?original tooth positions in ?gray and the proposed final positions of teeth being moved in green, as well as the predicted amount of tooth movement for each tooth.

Figures 9B and 9C: Pre/Post Treatment. Note: in the oblique view, the ?significant reduction in overjet is not necessarily discernible from the ?frontal photograph view.

Note that the upper right central incisor moves more than 2.6 mm over the 14-month treatment period. In the case of the lower arch, the archform was altered significantly in 7 months. In Figure 9A, the various stages are overlaid on one another showing the significant tooth movement and repositioning that was achieved.

In summary, I have found that MTM Clear Aligner Service Center offers a unique cost-effective development in the clear aligner market. The aligners are esthetically pleasing and have been shown to result in less risk of gingivitis, a lack of decalcifications (which can occur during orthodontic treatment with fixed oral appliances), reduced discomfort, and fewer oral irritations. Greater compliance can be anticipated with aligners that are designed to “Fit First,” as they are gradually activated and will not cause undue discomfort. OP

CVS and SmileDirectClub Partner for Pilot